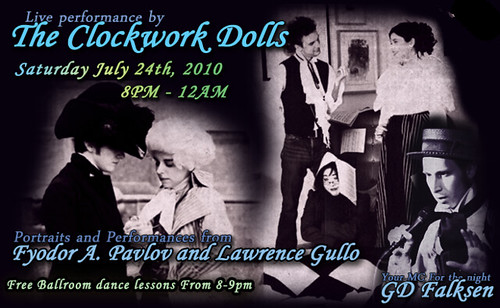 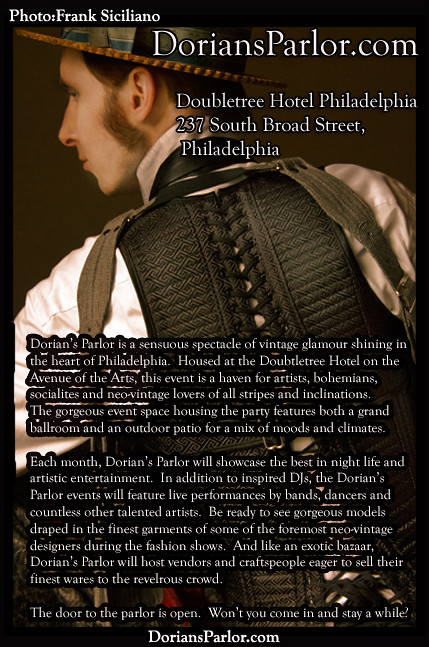 ( Collapse )
Also we have just enough space for 3 more vendors to come and show there wears, If you would like to do so, act fast and contact us at Vending@doriansparlor.com for more details.

Rise up Maids and Cooks, Nurses and School-Mistresses, Prostitutes and Grocer-Wives! There shall be a Revolution of Flower-Sellers in our Lifetimes!

Join Jane's Army*! We want you!

Look up, ye Downtrodden! Look up into the great, flawless Sky. Those are not Clouds, but silk Balloons in Every Color, striped Lurid and Gay. We grind our Bones to Dust in the Streets, but above us Zeppelins soar on perfumed Winds, and fine Folk in Leather, Feathers, and Buckled Boots sip Champagne from Crystal, staring down at us with brass Spyglasses, making Wagers on which of us will Perish next.

We want your budget Steampunk finery . . .for the working class! Steampunk has always been about the future that never was. We're putting together a piece for the steampunk community featuring working class steampunk fashion.


What you do not see are the Children who wind the Gearworks, stoke the Fires, load the Aerial Bombardments, pack Powder and scrape Bird Offal from the Engines. Children who release the glittering Ordnance that shatters the Earth below. You do not see their bruised Bodies, their broken Knuckles, their lost Limbs. You do not hear the cry of the ruined Innocent over the roar of the great shining Zepplin.


We're also starting a charity aspect. We're hoping to get flower sellers at Arisia (and other cons too hopefully!) in full steampunk flower seller regalia. We will be donating all proceeds to Bridge Over Troubled Waters, a Boston runaway shelter and resource center for troubled teens.

Our first project will be steampunk armwarmers. If you would like to participate, email janesarmy (at) gmail (dot) com with suggested retail price and your store if you want a plug and pictures of your arm warmers. We'll email you an address to send them to. Deadline: July 1st 2010.

We're starting a revolution and we want you to be part of it! We want to see Jane's Army out in full force at conventions and steampunk events!


* Read all about it in The Anachronist's Cookbook by Catherynne M. Valente, Steampunk Tales Issue 1

It looks v. probable that we will be joining a Certain Convention in Boston, however it is not fully official yet. We will be posting news in the coming weeks!

Thought this would amuse some of you.

I still can't give much detail here yet, but we're still in talks. Basically, to give you some idea of what's going on, we're looking for a localish convention that we can be added to. Thishas become more fashionable at larger cons (i.e. having "cons within cons"). What this will do for us is make it so we can focus on giving you the quality programming you love, instead of worrying about our bills.

We've had several offers, we're currently in talks to see which one will be best for the future of SalonCon. Please bear with us, we hope to have some more definative answers for you within the next several months.

with love,
Deb
Minitrix of Organization

I had purchased this necklace at the last Salon Con, and then promptly lost her contact information. I would like to see what else she has. 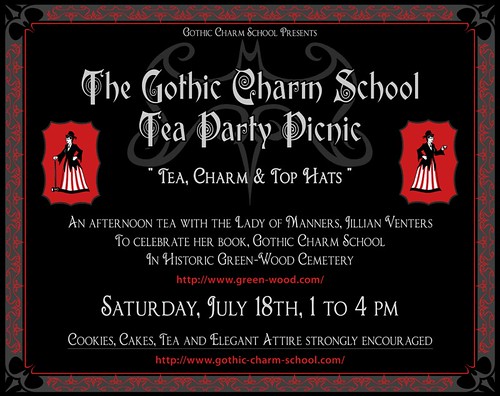 Cut and paste the code for the flyer below to invite all you wish.

July 18th,
1 to 4 PM
A tea party picnic at www.green-wood.com/ around Green Wood's neo-gothic Historic Chapel and the nearby pond, Valley Water. An afternoon tea with the lady of manners, Jillian Venters, to celebrate her book, Gothic Charm School www.gothic-charm-school.com/.
All are welcome. Free tea, cakes, cookies and fun for all.
We welcome you to bring your own food and to dress well however you wish and enjoy the day with the lady of manners, her book www.gothic-charm-school.com/ and this wonderful space.

The Girl Who Circumnavigated Fairyland in a Ship of Her Own Making is now live!

For those of you who are unfamiliar with Catherynne M. Valente's work, she is most famous for her gorgeous fairy tales (Orphan's Tales, Vol. I & II), which won the prestigious Tiptree award and her skinpunk revolution, Palimpsest. She was featured in MTV News' documentuary on the Steampunk movement and is a beloved member of the convention scene.

This economy has been difficult for everyone, but it's been especially difficult for those in creative lines of work. As you may know, Catherynne M. Valente's (

justbeast was laid off six months ago. While they have both been working diligently since then, Cat on her writing and D trying to pick up freelance work, the cold hard fact is right now it's not enough.

Cat and D are in rather dire straits as Cat describes here.

We need each other, folks. If we are going to practice what we preach about being a community, we as artists and dreamers need to hold each other up when things get hard. And things have gotten hard for Cat and D, so we need to help hold them up too.

How You Can Help:

3. Sign up for The Girl Who Circumnavigated Fairyland (TBA)

4. Put an item or service, no matter how big or small, up for auction on this journal for people to bid on. Bids will be conducted in the comments and payment and shipping is to be determined by the seller.